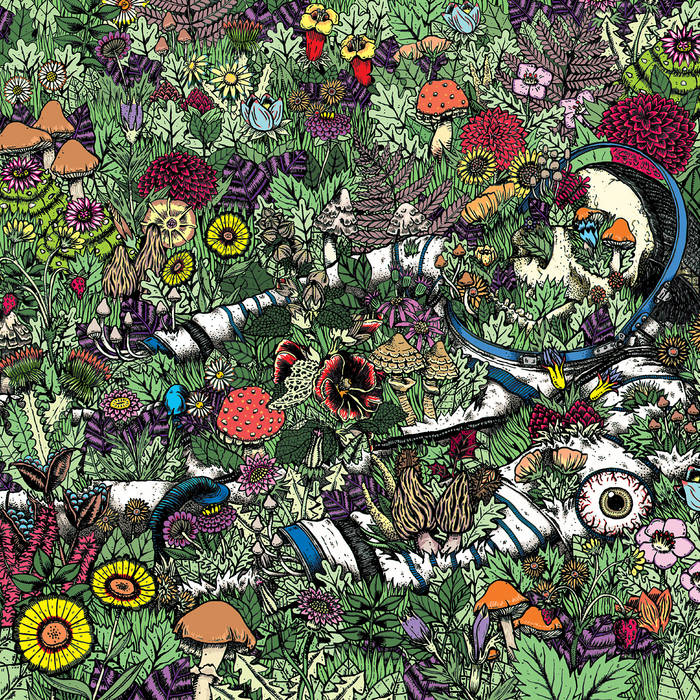 Jason Strange band here for sure. They seem to be mixing two usually mutually exclusive sounds, with a doomy/sludgy low end, paced at thrash metal speeds. It's nice to see bands can still do something new, and their sound, at least on this album, is quite enjoyable Favorite track: Rambo 5 (Pre-Emptive Strike).

Salt Keep it up fellas! It's rare that I can listen to an album all the way through and thoroughly enjoy every track. You've nailed it on this one. New drummer was a good choice. Cheers! Favorite track: Diver.

Camryn Marquez This band's sound is really interesting to me, because for a thrash metal band, they have a pretty bass-heavy and sludgy sound. But guitar tone aside, these guys know the power of excellently crafted riffs. This album is cinematic by virtue of the virtuosity of the guitar licks on display. Favorite track: Tachycardia.

"So refreshingly anti-bullshit are Oozing Wound that they could conceivably turn out to be the Nirvana of thrash." - Noisey

The Nirvana of thrash, you say? Well, that is exciting! It can only mean one thing — Oozing Wound will make us a lot of money and die and then make us even more! So excited were we by this possibility, that we sat down and recorded an interview with our own band. Two birds, you know — we could write the bio and get bonus material for the posthumous box set all at once!

The details:
Oozing Wound spent four days getting a studio tan at Minbal Studios in Chicago to record the new album Whatever Forever with recording engineer Matt Russell, which is four times as long as it took the band to record its 2013 debut Retrash. Russell mixed the album and it was mastered by Heba Kadry at Timeless Mastering.

Now onto some of our insightful, thoughtful questions and, of course, their replies.

How do you describe the new record to someone who isn’t familiar with Oozing Wound?

Z: Tipper Gore's worst fears incarnate. A horrifying concoction of apathy and malaise wrapped in a delectable sheet of hatred, drowned in a bath of contempt represented here by club sauce. Great for parties, ask your caterer for details.

K: It’s a spicy record. Ya best be sure to over toke if this is your first trip with the ooze. Great for bong couch sessions and hot boxed car rides. Loud proper speakers a must, no laptops or little Bluetooth Mambos.

Are there any significant developments in how this record was written and recorded compared to Earth Suck and Retrash?

Does the album have any themes or motifs? What's the story behind the title?

Z: In the past we've explored what it means to be a band in the twenty-tennys (Retrash), and how life is a pointless pummeling from the pugilist known as existence (Earth Suck). Now we bring you Whatever Forever, a culmination of nihilism, yeah-dude radicalness of the early 90s, and the belief that taking anything too seriously is a guarantee it'll suck.

Z:
Rambo 5 (Pre-Emptive Strike): Another love letter to the greatest movies and our hope that a fifth installment is coming. We gave it a title, Stallone. WE WANT THIS SO BAD PLEASE LET US WRITE THE THEME SONG.

Diver: Look, I'm not trying to be a downer, but when people you love die it can be, uh, painful?

Deep Space: Deep Space Nine episode 619 “In The Pale Moonlight” One of the greatest, if not the greatest, episode from the best Star Trek series (shut up, yes it is).

Mercury in Retrograde Virus: Ever notice everyone who complains that planets are out of alignment and it's fucking up their life just seems to have a fucked up life period?

Weather Tamer: Senator Jim Inhofe of pretend grown-ups state Oklahoma. The man famous for bringing a snowball onto the senate floor in a confused attempt at explaining the “big lie” of climate change. When we don't have fresh water anymore and all the coastal cities become water parks, you can thank this shit stain of a human.

Everything Sucks, And My Life Is A Lie: When you write something catchy, best to wrap it in a shroud of sarcasm.

Eruptor: Not quite a song and not quite a word. Let's play connect the songs!

Tachycardia: Ever feel like you want to die only to realize you really just want everyone else to?

You Owe Me, Iommi: Better mock your heroes too.

Sky Creep: Vladimir Komarov, the first man to die from a space mission, but not actually in space. Really fucked up story. He amended his will before the flight for an open casket funeral so the generals would have to see what they did to him. Google image search to see why!

K: What Zack said about all the songs but also: If you don't like the earth stay the hell off it for good. The idea that we know more about the surface of the moon than we do about our ocean is proof that a major lie is going down or more probably that we are truly the stupidest species on this planet.

Do you guys ever let your drummer speak?

C: I grew up in Appleton …… (sorry, we fell asleep and stopped recording for a moment) …… I hated school …… (yup, happened again) …… I ventured out of Wisconsin applying to the University of Surrey's Tonmeister program, in my opinion the bees knees of audio engineering programs. Huge mind blowing experience, but I quickly ran out of money for tuition/housing/ food, so I had to drop out ……(had to get a beer, oops) …… Recently, I quit my job at an Aerospace company to work for myself repairing and designing audio gear. Life is amazing and being a part of the Ooze is making it that much sweeter (Kevin actually said that) …… oh fuck, my forearms are about to fall off and we just started playing!!! Noooo!!!! Ummm….yeah. That's about it.

Bandcamp Daily  your guide to the world of Bandcamp

outré black metal, with a Victory Over the Sun interview and music from Liturgy and Jute Gyte.